On Tuesday morning we decided to bundle up, brave the cold and go to the Zoo. We found our way up Connecticut Avenue and found the parking area. We received a ticket that said "Free Parking Today," so we thought we'd lucked out.

The wind was nasty and very few animals were out in the Zoo. What a disappointment for everyone. 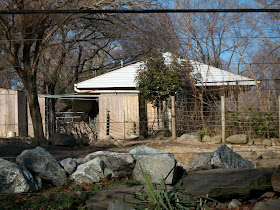 The zebras did venture out of their enclosure. 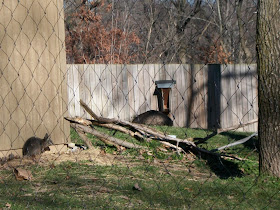 As did the Capybaras and the kangaroos. 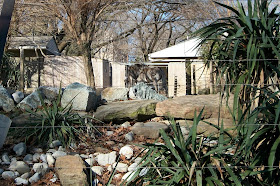 At another point we saw two zebras, but they were staying quite close to the buildings in order to stay out of the brisk wind. 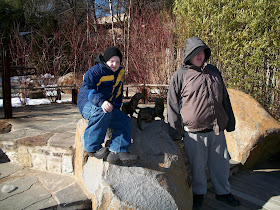 As you can see, the boys were well bundled up. 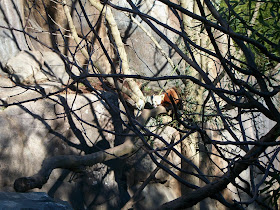 This is a tree kangaroo, according to the sign posted. I didn't know there was such a thing, so we all learned something. 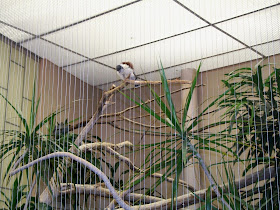 We went into the bird house and saw parrots and toucans and a variety of other birds AND we were able to get warmed up. 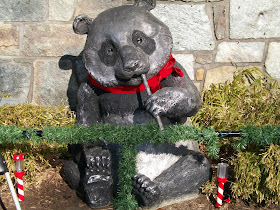 At first, no pandas were out. We did watch them on the webcam and a very nice lady explained some of the habits. We did get a glimpse of one later eating bamboo right next to the building. This little guy was outside the Panda Cafe.

We didn't see much else and I wasn't impressed with the smell either. When we got to the gate, the guard charged us $15 saying that the free pass was only for certain people. What's up with that. If the ticket said free, it should have been free. Anyway, we paid the parking and headed downtown. We went to the Smithsonian of Natural History, where we had lunch. That was the most expensive Smithsonian to eat at. $64 for hamburgers and soda, so we would never eat there again.
This was when Jordan left to get some more soda and was going the wrong way. I got up to go after him and my coat caught my cup of soda and spilled it on Brandon. He was soaked. So we decided to head back to the motel. 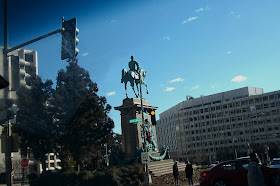 On the way, we saw this statue of a Civil War soldier. We couldn't tell exactly what type of memorial it was. The photo was taken from the van. 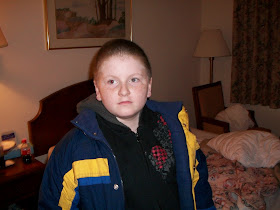 We were all glad to get back to the motel and get warmed up. The boys played Spong*e Bob So*rry, Dwight watched tv and I read. After we went out to eat, I played Sor*ry with the boys, Dwight watched tv and then we all bunked down so we could get an early start on Wednesday morning.
Comment: Really Washington is a very nice place to take kids. All the Smithsonians are free. Hotels are reasonably priced...much more so than we thought. The only place food was really expensive was at the Smithsonians, so we learned our lesson and bought our lunch at street vendors. Same fare, much different price.
at 4:17 PM